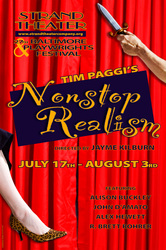 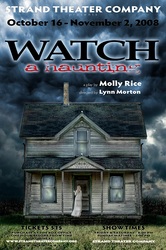 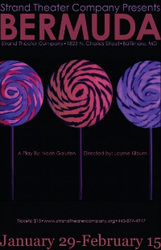 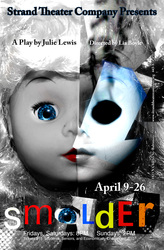 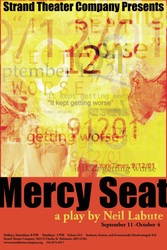 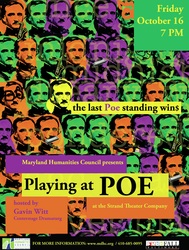 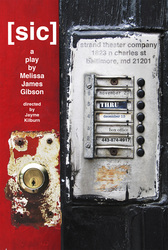 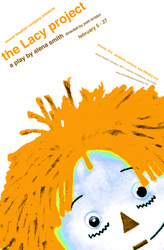 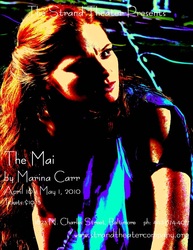 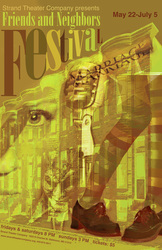 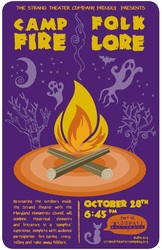 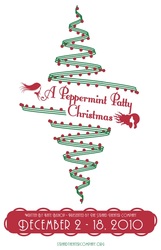 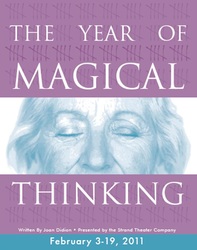 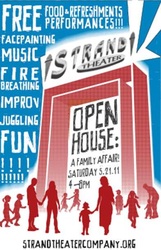 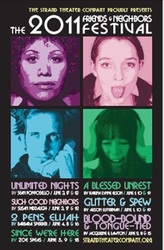 That Pretty Pretty; or, the Rape Play 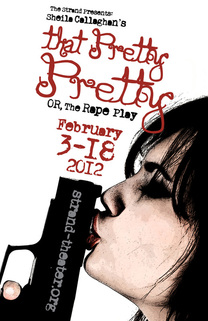 “I got fuckin’ mad pretty on my shit.”

Radical feminist ex-strippers Agnes and Valerie scour the country on a murderous rampage, blogging their exploits in gruesome detail. Meanwhile, scruffy screenwriter Owen tries to bang out his magnum opus in a hotel room while his buddy Rodney indulges some baser instincts. When Owen writes the “dangerous women” into his script, reality unravels. Can Jane Fonda—yes, that Jane Fonda—prevent complete chaos?

The Strand’s Founding Artistic Director Jayme Kilburn brings this acerbic acid trip to startling life in what will be her final production with the company. "It was not an easy decision to leave the Strand, particularly when every season has marked an evolution in scope and quality. This year especially I have been particularly challenged with two great plays: first Anna Bella Eema and now That Pretty Pretty…. Sheila’s material is really jarring, for the artists and will be the same for audiences. I sit in rehearsals sometimes disgusted at what we are creating; the characters’ behavior and the physical staging are both so extreme. But this is precisely the kind of challenge I embrace as a director and producer.” Due to the highly graphic nature of the play, the production is suitable for adult audiences only. 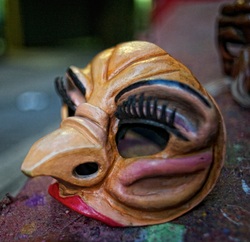 _The Strand Theater Company continues its first annual Second Saturday Reading Series with One Glitz Wish by Maryland native Kristin Harrison. The series is FREE and open to the public. Audience members are encouraged to provide feedback to the playwright after the performance.

Welcome to the Marriott Courtyard Hotel and Conference Center in Altoona, Pennsylvania, host of the Sheesh Louise Convenience Store sponsored One Glitz Wish Pageant! Three contestants, who are really, probably, most likely little girls, compete as finalists for the ultimate prize—the Wishing Crown. The winner will have her one heart’s true wish granted, and the other two will learn a valuable lesson about losing. But it won’t be easy. Andi is everyone’s favorite to win, but Madison and her sweet charms might take the day. They both had better watch out though because Destinie, a runner up two years in a row, will stop at nothing to claim the Wishing Crown, and finally get her wish.

One Glitz Wish , a semi-ridiculous comedy with teeth and heart, tries on notions about the performative nature of being a ‘little girl.’ The play’s absurd humor reconsiders the hierarchies of race, gender, and species using characters based on Commedia Dell’Arte stock types. Drawing on over a decade of shared visions for the stage, Harrison and Cariaso collaborate to now create a brand new comedic form—Popcorn Commedia. This new form begins with characters that carry within them a strongly identifiable kernel from a traditional stock commedia persona. But, in contrast to a traditional, ad libbed performance, Popcorn Commedia uses a script to build transformative heat with friction from an intersection of conflicts that are at once ‘high stakes’ and also ridiculous. Instead of representing an immutable stock type, mask work in Popcorn Commedia serves the evolution of the character, allowing him or her to bloom, evolve, and ideally inspire delight in the audience. 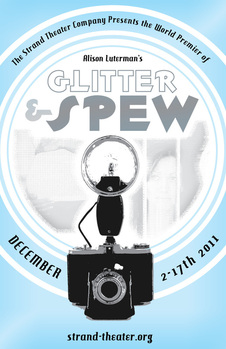 "You know the best way for me to ruin someone’s life? Get involved with them."

Fresh from a workshop production in the Strand Theater Company’s Friends & Neighbors Festival 2011 in June, California-based playwright Alison Luterman’s three short plays full of Glitter and Spewform a three-ring-circus meditation on media exposure, shame, and personal responsibility. In A Night in Jail, a newly incarcerated starlet is shocked to discover that her guard can’t be bribed and that her visitor is a dead French monarch. The bitter wife of a disgraced politician goes rogue—much to the dismay of her adult children—during an awkward satellite interview in The Toilet Stall. When the titular Freak tries some incognito pre-natal shopping, she can’t avoid the advice of a fellow shopper or the judgment of the sperm donor who made it possible for her to become “Dodecamom.

Founding Artistic Director Jayme Kilburn chose Glitter and Spew as an edgy alternative to traditional—and too-often saccharine—holiday programming. “Strand audiences really love the combination of the ridiculous with the outrageous, and this hour-long triptych of plays about people behaving badly offers a hilarious judgment of our pop culture obsessions.” Folks who’ve had enough of Scrooge, Nutcrackers, and impish elves should find Glitter and Spew an oasis of snark in December. Actors Elise Edwards, Ryan Nicotra, and Melissa O’Brien pull triple duty, appearing in all three plays. 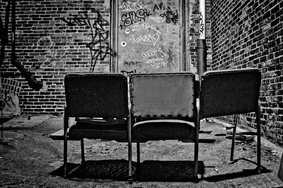 Developmental Stages (inspired by Erik Erikson) are short stories about death and loss. The stories are told from the perspective of a young girl falling asleep in a church service. The piece uses puppetry, music, and the Good Book to give the experience of growing up and knowing death, like an imaginary friend. If nothing else, Developmental Stages will make you laugh.

The piece blossomed from a workshop with Holly Hughes, and was developed this year in Juanita Rockwell's New Works class at Towson University. 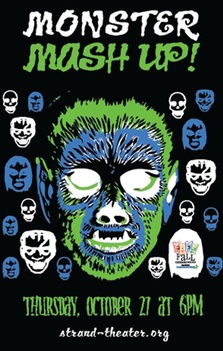 The Strand Theater and the Maryland Humanities Council hosts Free Fall Monster Mash-up! The Monster Mash-Up includes costume making, monster mash dancing, and free refreshments! Participants will learn the origins of their favorite monsters from Erik Kjeldgaard, Associate Professor of Anthropology at the University of Maryland, Baltimore County. Audiences will then break up into smaller groups, based on their favorite monsters, and create their own scary stories. Free Fall Monster Mash-Up is fun for the whole family!

Schedule of Events
6:00pm- Reception with pizza, punch, and costume making
6:30pm- Participants will be taught the 60’s Monster Mash dance by an instructor. After the dance has been learned, participants will perform the dance for their peers.
7:00pm- Erik Kjeldgaard (Anthropologist) will educate the audience on the history of monsters and their origins.
7:45pm- Participants will form groups and create a story using their monster of choice as the main character.
8:25pm- An individual from each group will present the group’s story to the audience. 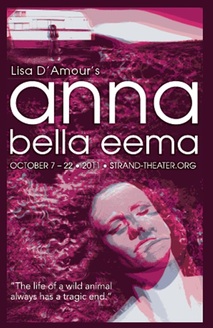 Ten-year-old Anna Bella and her hermetic mother Irene live in a ratty trailer on the edge of town. When the threat of a new interstate looms, Anna Bella animates a new playmate out of dirt, sweat, and spit. As Anna Bella and Irene struggle to protect their home, the very-much-alive mud girl leads them on a voyage full of wildlife, wonder, and benevolent monsters.

"All three actresses should be lauded for their mesmerizing performances and their ability to wrangle a complicated and demanding script in which timing is everything..." Giordana Segneri, Broadwayworld.com 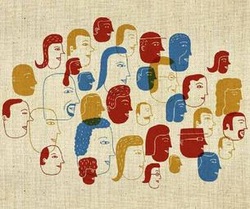 The Absolutely True Diary of A Part-Time Indian by Sherman Alexie is the pick for the Maryland Humanities Council One Maryland One Book 2011.  Come to this dramatic reading of brief excerpts from Alexie’s laugh-out-loud funny, yet bittersweet account read by actors from the Strand Theater. Find out why everybody’s talking about this powerful book!  Be part of the dialogue and share your thoughts about True Diary. Want to read the book first?  Check out a copy from your local branch of the Enoch Pratt Free Library.

About One Maryland One Book: Now in its fourth year, One Maryland One Book is designed to bring together diverse people in communities across the state through the shared experience of reading the same book. Readers are then invited to participate in book-centered discussions and other associated programs at public libraries, high schools, colleges and universities, museums, bookstores, and community and senior centers. 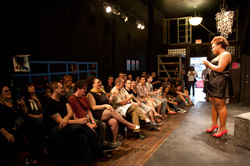 MASHA! is a poignant comedy about leaving, coming and staying home. Masha Kohner, a thirty-four year old Lebuvitch divorcee, spends her days tending to Yitta, her sometimes-delusional 98 year old great-grandmother, in their modest house in Monsey, New York. When Masha learns that she must have a double mastectomy due to an aggressive bout of breast cancer, she makes plans to go to Manhattan for the surgery and stay with her estranged lesbian sister, Yael. Except Yael is no longer Yael. Yael is now Jerri and in the process of saving up money so that she too can have a mastectomy, in her case, to become a him. In MASHA! the characters take us from Monsey, to the East Village, even to Jim Thorpe, Pennsylvania, all in the hopes to find home, wherever that may be. 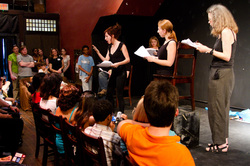 At the heart of every elementary school lies the PTA, the Parent/Teacher Association, and Milwood Elementary is no different. Typically, PTAs are responsible for bake sales and candy sales and sponsoring a feel good sentiment for its school.   It is a way for parents to volunteer and feel like they are a part of their children’s education.  But get a bunch of estrogen card-carrying members who are power hungry, bitch-wielding broads, and you have the behind-the-scene antics at Milwood Elementary’s PTA.  Funny, absurd, and scary, don’t cross these women unless you have eyes in the back of your head!

This FREE series is brought to you by Second Saturdays in the Station North Arts and Entertainment District.

About the playwright: Sharon Goldner

Off the Cuff: IMPROV WORKSHOP
Saturday, July 9 at 7pm | FREE
as part of the Second Saturday Series 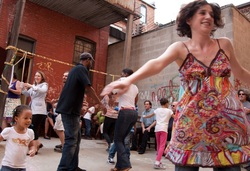 You don’t need any experience to learn improv! Improv is a fun way to get in touch with all those characters that are somewhere inside of you. Off the Cuff: Improv Workshop is being offered at the Strand Theater throughout the year. As part of the Second Saturday Series, the Strand is offereing a FREE class for all Station North patrons. Please stop in and participate, or just watch...the only thing that is required is that you have fun!

Unruly Women presents Shrewing of the Tamed
Adapted by Francesca Chilcote and Laurie Wolf
Saturday, July 30 at 8pm and Sunday, July 31 at 2pm

Shrewing of the Tamed explores the politics of power, sex, and laughter by taking Shakespeare's original text and turning it on its head.

Shrewing of the Tamed subverts the traditional conceits of Shakespeare’s classic comedy, challenging gender norms and power structures by flipping the show on its head. By grounding the play in the "Induction," Shakespeare's original framing for the text (which actually is in a bar!) this adaptation irreverently strips away all the excesses of traditional productions, finding the joy, pain, and absurdity in what is one of Shakespeare's most problematic comedies. Recipient of the William and Mary College Chappell Fellowship, Shrewing of the Tamed is the culmination of a year of research and refinement. The culmination of Francesca Chilcote's Senior Thesis Project on Women and Comedy, Ms. Chilcote won the Chappell Grant for Undergraduate Research from her university, The College of William and Mary, to workshop this production and produce a documentary on the development process.

The entire Unruly Women team is thrilled to offer this excellent retelling to entertain and challenge Baltimore theatregoers this summer.